Aloha Golf Club is close to Marbella on the Spanish 'Costa del Sol'. It is one the best clubs in 'Golf Valley' which has one of the highest concentrations of top golf courses in Europe.

The course was created by the renowned Spanish designer, Javier Arana, who also designed El Saler (Valencia) and El Prat (Barcelona). Aloha was his final design; he died in 1975, just as the course was being completed.

On 25th October 1975 the inaugural drive from the first tee was made by Mr. Angel de la Riva, President of the Royal Andalusian Golf Federation.

Aloha Golf Club was originally run by the Banco de Bilbao. In March 1983 IBSA completed its property development around the course. One thousand five hundred shares were issued which were originally destined for 1,200 villa owners with the balance going to existing players and members.

In January 1986 the first AGM of shareholders was held to choose the first President of the Club, Mr. José María Ibarrondo.

The current President, Mr. Rafael Fontán Zubizarreta was elected on 16th February 2010.
He was reelected to serve a further 4 years on March 27th 2014, and then again on February 2018. 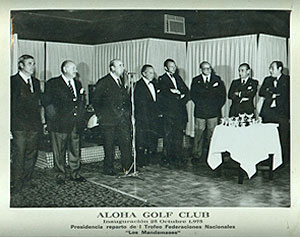 Aloha became a 'members only' club and has developed a friendly atmosphere that makes many of our members see the Club as a second home. Aloha has a cosmopolitan membership with over 20 different nationalities represented.

Throughout its history, the Club has been honoured by the presence of personalities such as HM Mr. Juan de Borbón, Prince Klaus of Holland, Prince Edward from England and the King of Malaysia. 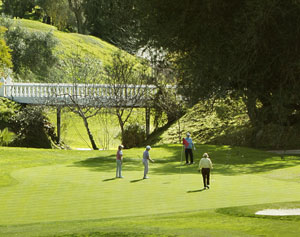 Aloha has hosted many prestigious tournaments.

In 1978 the Spanish Amateur Championship was held here.

In more recent years the Club has been privileged to welcome the PGA European Tour.

In 2007 Aloha played host to the Open de Andalucia (PGA European Tour) which was won by Lee Westwood who set the course record of 64 strokes. This victory ended a long drought for Lee and set in motion a winning streak that culminated in his elevation to No.1 in the world.

In 2008, following the previous year's success Aloha again hosted the tournament. This time it was won by Ryder Cup player Thomas Levet after beating the young Englishman Oliver Fisher in a sudden death playoff.

In 2012 the Open de Andalucia (PGA European Tour) returned to Aloha once again. The event was won by Frenchman Julien Quesne An eight under par 64 – matching the Aloha course record – took him to 17 under par and neither the young Italian Matteo Manassero nor the Spaniard, Eduardo De La Riva could catch him.

In 2016 Aloha hosted a major European Tour event, the Spanish Ladies Open. The competition was won by a 'local', Azahara Muñoz, who was born in nearby San Pedro. Azahara is the first Spanish professional to win this title. Muñoz pipped American, Beth Allen at the final hole, finishing one stroke ahead of Allen, at 10 under par. 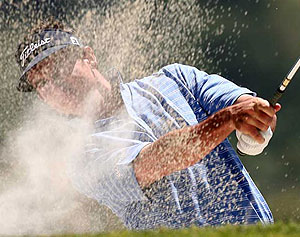